This article comes with a health warning: Share price is not a completely accurate reflection of the real value or strength of a business. It is, however, a reflection of the market’s confidence in that business. As such, a great many things will influence a share price; it is equal parts wisdom of the crowd and tyranny of the masses.

If you’ve read the Wealth of Nations then you’ll know that competition is one of the invisible hands that Adam Smith believed shaped successful markets. If you haven’t then let me paraphrase; where competition flourishes and is successful, consumers benefit. As a general rule, competition is now considered not simply a good, but in fact necessary, driver for progress and change. The invisible hand now runs over our education and welfare systems as much as it does our economic markets. Its empyrean benevolence touches us all. Until it gets cut off that is. 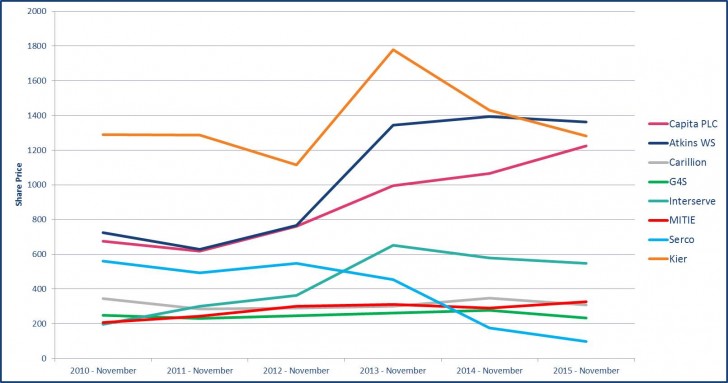 The chart above shows the five year performance of a selection of support service firms. This data tells the story of a polarising market where a small number of firms have broken far and away from the rest. Anecdotally I’ve been told of a number of single bid tenders that have come about in recent weeks, which, I’m reliably informed, was previously practically unheard of. I have a genuine concern that local government is being served by a far less competitive market than it was five years ago and this is to the sector’s disadvantage. In short, has the invisible hand been lopped off? It’s been a while since I’ve referenced Michael Porter but his thinking on competitive advantage would be worth revisiting. The oligopolistic tilt the market has taken in recent years would raise a smile from the ex-Monitor man I’m sure.

Public services, where possible, have worked to become more efficient internally, cut the waste and put services that offer limited margins out to the private sector. In response, only those able to operate at huge scale, or who can raise enough capital to invest up front to make longer term deals attractive, have benefited. If we project forward over the next five years, and if my concern plays out that the market contracts and fewer firms are able to compete, do the depths of innovation, often a primary reason for looking to the market, become shallower?

The ideas, the innovation and the critical thinking required to do the next 20% of savings will need to be far more radical than what helped us to achieve the last 30%. Do fewer possible partners for local government make this task easier? I don’t think so. It certainly places a special pressure on organisations like IMPOWER, and those similar to it, to ask better questions of the sector and do more of the intellectual spadework.

The oligopoly problem is not confined to public services. Historically what breaks them is either a game changing innovation/creation; or an established player decides to run counter to market norms and completely reinvents its business model. With declining margins and local authorities generally unwilling to bind themselves to traditional contracts, shifting the dynamic of the market will increasingly be in the interests of the private sector as much as it is the publics. Will we see a market player break ranks with the rest? Will the digital giant finally awaken? Or will an empire fall, a la Serco 2012 – 2015?

In the coming weeks much time will be spent pondering what will be left of local government by 2020. The diligent will be asking the same of its market.