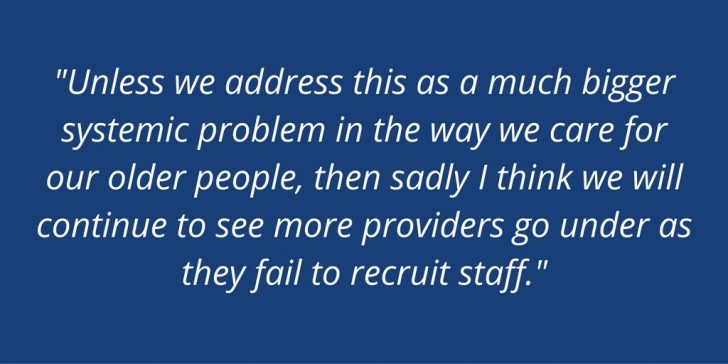 My best friend got married last year. In traditional fashion, five of us set off for a hotel to spend the weekend being ‘Hen’s’ and eating, drinking and just spending time together. We’d chosen the location of the hotel to accommodate one of our friends who had fulfilled a lifelong ambition of opening her own home care business. She needed to be on call for her ‘ladies’ as she called them, just in case one of her members of staff let her down. As it was, we saw very little of Bev for the entire weekend. Almost as soon as she had arrived, she got a message that one of her team had called in sick. She had no cover, so she had to go back to provide the care that had been promised. She came back early the next morning, having already sorted out two clients – again, covering for someone else in her team who could not come in. She left early that evening, before the rest of us to fulfil the remainder of her commitments.

During the time that she was with us, I saw first-hand the pride she felt about finally achieving her dream. She was due to be inspected the following week and was nervous but confident that she would achieve a good rating. She did. I also saw the toll that running that business was having on her. This wasn’t just a ‘job’. It was a vocation. She truly cared for the people she looked after and had real pride in knowing that what she did was making someone else’s life better. But, she was also a mum with young children and despite her very best efforts, she couldn’t recruit and retain a workforce that reflected her commitment and passion for caring for her ‘ladies’. She was routinely delivering care around the clock almost single-handed in a way that anyone but her could see was unsustainable.

Sadly, there was no happy outcome to her story. Like many others up and down the country, Bev eventually reached breaking point and had to close her business. The pressure on fees from local authorities who want a gold service but are only able to pay for a bronze one at best didn’t help. But, Bev wasn’t in it to become a millionaire by Christmas, so she would have probably continued delivering for not much more than the minimum wage. The thing that finally caused her to admit defeat was her inability to recruit people.

It is the same story written about in my local paper today. A well-loved, award winning home care provider is folding. The reason given is simply that they are unable to recruit and retain high calibre people who share their vision and values of delivering excellent care.

Undoubtedly money is a big factor in all of this. The crisis facing the care sector is routinely put down to the pressures being piled on them by local authorities who are squeezing the fee rates at a time when costs are on the rise. The introduction of things such as the national living wage means that operating a sustainable and profitable business is no longer feasible. There have been several high-profile examples of providers effectively shutting up shop and giving back the keys. Mitie recently withdrew from the home healthcare market after making a loss of more than £100m in the first six months of trading. Four Seasons, the biggest care home operator in the country, recorded a pre-tax loss of £264m last year and a total of 380 care home businesses have been declared insolvent since 2010.

The CQC have declared the care sector to be at a ‘tipping point’ and there are calls for the Government to invest immediate funding to help stabilise the sector. Whilst ensuring social care funding is sustainable – which appears to be the holy grail for all Governments – is the right thing, I fear that just focusing on the money risks missing some of the finer points of the issue.

Bev’s business didn’t fail because she couldn’t make a profit. It failed because she couldn’t recruit high calibre people. It is clear from the story in the paper today that the award-winning home care business isn’t shutting because it can’t make a profit. It is closing because the owners can’t find the right people who share their values and deliver to their standards. Brexit and the possibility that we close off the opportunity for migrant workers will exacerbate this problem further– particularly in some parts of the country such as London where the sector is highly dependent on the migrant population to fill vacancies.

And yet we still don’t seem able or willing to move the debate on beyond a focus on money. When we talk about rewards and status, it is equated with paying more as though simply raising the hourly rate for care workers will somehow make being a carer a more attractive career option. It won’t. Money is not what motivates caring and compassionate people to do this role. I’m not naïve in understanding that better pay and conditions won’t help but I’d bet that being valued, making a difference and feeling a sense of pride in what you do are much bigger factors in determining if this is the job for you.

The hard truth is that in this country, caring for our older population is not valued. In trying to raise standards we have put in place inspections, regulations, minimum education standards, all of which seem to have missed the point. We need people who care and who are driven by a sense of pride in what they do. We need to respect the people who go into the caring profession not because they are doing a job that no one else wants to do, but because they are doing a job that is valued and worthwhile. We need to understand the motivations of these caring professionals and address those not simply focus on topping up their pay packets.

The Autumn statement might hold out some hope for how we deal with the immediate financial crisis in the care market but, unless we address this as a much bigger systemic problem in the way we care for our older people, then sadly I think we will continue to see more providers go under as they fail to recruit staff. We are also likely to continue to see more poor care exposed by the likes of Panorama and that really would be a scandal.