England (the football team) reaching the semi-finals of the world cup was a truly amazing achievement. But for me, yesterday’s data release showing that England (the country) has now unblocked a grand total of 2, 190 beds is a very close second. Here’s the detail:

All this means that 2, 190 beds have been released over 15 months, which is a huge achievement. To put the number in context, that is more beds than in any Acute Trust in England – more beds than in any single hospital in Central Manchester, Leeds or London. But it is not just the number that is impressive, it is the scale of the challenges that have had to be overcome to achieve it. Two of them particularly stand out.

Firstly, the reduction in delayed days has been achieved despite the fact that emergency admissions continue to rise – in May, they were up 3.5% on the same time last year. 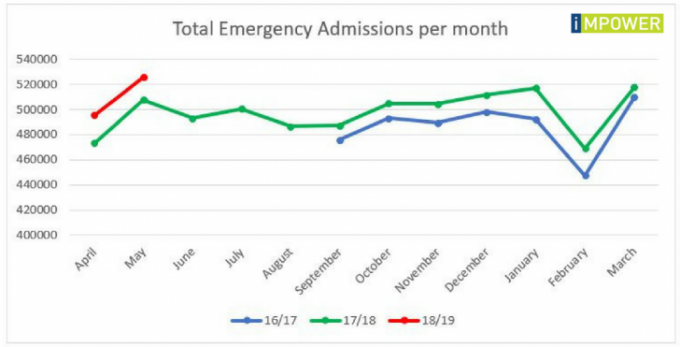 The ability of both the NHS and local authority departments of social care to process this rising demand has clearly improved. In fact, had demand remained static at the same level as May 2017, we would now have a national DTOC rate of 9.79 days per 100,000 population, almost at NHS England’s target of 9.4 days.

Secondly, the overall improvement in DTOC has occurred even though performance in 38 out of 150 local areas is actually getting worse. 12 areas are in fact of extreme concern – they were above the target set in February 2017 and have continued to get worse. (A Mexican wave should go out to those areas like Bristol who have managed to move out of this category)

Table shows the first ten authorities for each category; for a complete list, download the IMPOWER INDEX below

But despite the overall progress on DTOC and the significance of what has been achieved, I have to confess that I still don’t think that we are on a path to winning the DTOC world cup final in the longer term. From my perspective, we’re playing the wrong game, with the wrong rules:

Securing a World Cup victory over DTOC relies on us reframing the way we think about the problem. Health and social care leaders need to establish an inclusive ambition which goes beyond processing people out of the back door of hospitals.

NCASC 20: reflections on the ‘Minding the mental health gap’ session

Today's session shone a focused light on the profound mental health challenges we are facing now, and will continue to face for many years to come.