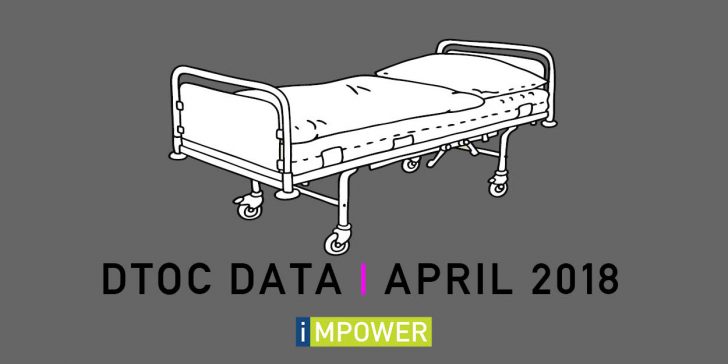 The latest figures from NHS England show that after a three month period of stagnation, Delayed Transfers of Care (DTOC) from hospitals have now dropped to their lowest ever level. The 3% drop in delay days between March and April means that the national DTOC rate now stand at 11.12 days, an improvement of more than 27% on the February 2017 figure against which the government set targets.

Delays attributable to local authority departments of social care recorded another robust decrease (4.4%) and delays attributable to the NHS were down by 1.7% – a welcome reversal after three months of increases. All this means that, in total, over 1,800 hospital beds have now been freed up across the system, with 746 to go to reach target.

79 local authorities have now met their target of 2.6 days. While a total of 124 have seen an improvement against their position in February 2017, it is still the case that nearly half of all authorities are still above target – and 15% have not managed to improve their position at all.

So what is the government’s response to this situation? They appear to have looked at what has happened (and not happened) and decided that the way forward is…..yet more targets!

As part of an expectation applying to the whole system, local authorities are now expected to report on, and reduce, the number of ‘stranded’ and ‘super stranded’ patients within their areas. A stranded patient is anybody who has been in hospital for more than 7 days, and they become super stranded once their stay in hospital exceeds 21 days.

I think we would all agree that no one should be in hospital any longer than is absolutely necessary. However, the setting of 7 and 21 day limits seems to me to be incredibly arbitrary and potentially very damaging.

Healthcare Resource Groups (HRGs), the currency used to define and commission NHS clinical activity, include within them a ‘trim point’ – the point at which a patient within an HRG would typically have been discharged from hospital if they had had no complications. Out of the approximately 2,400 HRGs, over 1,600 have a non-elective trim point of 7 days or longer – in other words, these HRGs accept (from a clinical perspective) that patients may need to stay for more than 7 days.

This raises two big questions. How can patients who are in hospital for more than 7 days simultaneously be classified as ‘expected to be in hospital’ through their HRG, and ‘stranded’ under the new target?  And how can local authorities be expected to play a role in discharging people who may not be medically fit for discharge?

Systems are already under pressure to ensure that the people who arrive at the front door of a  hospital are treated and then removed from the acute setting as soon as possible.  But the number of those people is going up and up. Emergency admissions in April 2018 were up by 4.7% compared to April 2017, with similar increases in each of the last eight months.

Instead of looking at the way in which systems are processing demand (and yes I have chosen that word very deliberately), perhaps we should be looking at what we could and should be doing to manage that demand in the first place.   This is where local authorities can really add value in the system, and where there are benefits for everyone, including patients.

Analysis that we have undertaken with clients shows that re-admissions to hospital (whether using the health or social care definition) are on the increase, and in some cases can be directly linked to the need to get people through the system as quickly as possible. There needs to be a change in mindset, from the very top, in order to move towards proactive care of our citizens and patients, rather than just reacting to crises or the latest set of targets.

I was delighted to see the recent announcement of the funding available from NHS Digital to encourage innovative approaches to sharing data between health and care providers. Shared data can be used to provide information for predictive analytics, which helps to inform the whole of the system about potential future needs – and in turn enables proper planning of delivery in an increasingly complex situation. Let’s hope that this type of innovation will be allowed to flourish, and ultimately replace attempts to monitor the wrong part of the system.

Guest blog – Jenny Coles: The ‘can do’ attitude of Children’s Services

Guest blog – Jenny Coles: The ‘can do’ attitude of…

Reflections from IMPOWER’s Shared Learning Event which I recently chaired.