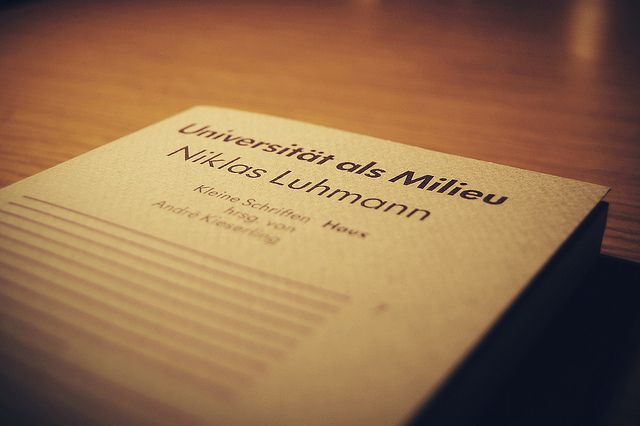 What it may say about me I’m not quite sure, but I do love verbosity. I like how words can be carefully selected, each one encrypted with meaning that needs to be decoded when subtly placed together to really understand their full significance. Take the sociologist Niklas Luhmann’s approach of writing complicated sentences with the deliberate intent that the reader was then required to read them slowly and carefully to understand. To most infuriating, for sure, but to me a pleasant delight.

More practically, there hasn’t been an organisation that I have worked with or for in the public, private or third sector that hasn’t developed some of its very own linguistic tropes. Common words that are used that have a specific meaning attached to them that you only fully cotton onto when you’re inside the system, or someone takes the time to explain them to you. To a great extent I think this is helpful and efficient. It allows someone to get their meaning across to those ‘in the know’ using five words instead of a couple of sentences.

I also have a suspicion that it is good for cohesion of those who are ‘in the know’; they literally speak the same language as you. In their book The Small Big, a book that outlines a series of small changes that made a significant impact on people’s behaviour, Steve Martin, Noah Goldstein and Robert Cialdini talk about how developing ‘uncommon commonalities’ are a key step to the rapid development of teams. Whether we think it’s a good thing or not, shared references in language are a factor in setting us aside and bringing us together.

The danger comes when we speak to others not ‘in the know’. At best it can be confusing. At worst it can be exclusionary or pompous. Using inaccessible language can actively disengage. I might say ‘proactive, holistic assessment’; the person I’m talking to might hear ‘unnecessary, airy fairy paperwork’.

It can also create difficulties when working across organisational boundaries. I’ve observed this when working in a joint health and social care environment. Whether to call the person whose care you are talking about the patient or service user remains an elephant in the room. Given the value of sharing language as a means of uniting people, it’s an area of subtle dissonance that we’ve not really scratched the surface of.

My advice?  Language is important but at its best it is also humble. David Ogilvy once remarked that you run the risk of being a “pretentious ass” if you’re writing slipped into the deliberately obscure. I’m inclined to agree. Keep using the words you think best articulate what you mean, but pay attention. Think about the person who you are conveying the message to and talk in their language. Yes, this can be surprisingly difficult. It just might take some effort to get used to. But by better understanding someone else’s language you’ll undoubtedly better understand them, and then, perhaps, they’ll better understand you.