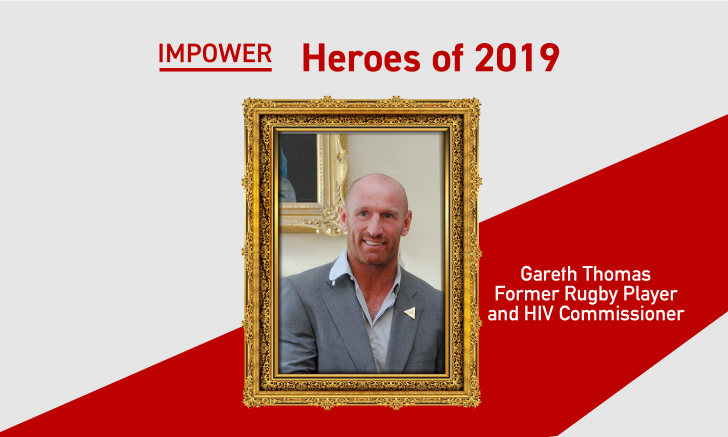 Undoubtedly any heroes list for 2019, must feature Gareth Thomas. Earlier this year, the former Welsh rugby player bravely revealed to the world that he is living with HIV. He immediately challenged the stereotypes and stigma around what someone living with HIV looks like and what they can do – including achieving an iron man.

The Terrence Higgins Trust recently revealed on World Aids day the incredible impact he has had with stats showing that three in four British adults (74%) are aware that the Welshman has spoken publicly about living with HIV. A YouGov poll of 2,143 British adults also found that of those who were aware of Thomas’s HIV status, 11% said it had improved their overall knowledge of HIV, while 7% said it improved how they would treat someone living with the virus. Thomas’s announcement in September also led to a surge in orders to the charity for HIV tests and calls to its helpline THT Direct.

During 2020, Thomas will continue to have impact through his role as an HIV Commissioner. He recognises that his rugby playing past means that he has incredible platform and network that he can utilise to improves people’s understanding of HIV and will undoubtedly lead to many more people being tested and lives saved.

Steve Farmery-Vagus discusses his views about LGBT+ history month, and how we can use the past to shape a more equal future.