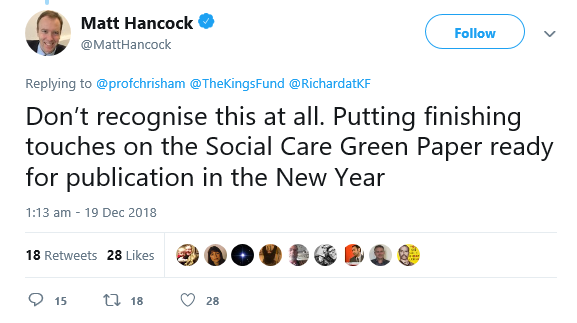 If I close my eyes and imagine what those finishing touches might be, I visualise a new introductory paragraph that says:

“We have realised that there is a fundamental flaw in publishing a green paper on the future of social care as it is impossible to consult on changes to the social care system when the vast majority of people do not understand the system as it currently is. That is why the widespread misunderstanding of our proposed social care policy changes played a role in the outcome of the 2017 general election. Almost every interested group was able to spot that the proposed new funding mechanism wasn’t perfect, and therefore saw it as damaging – even those who would actually gain from it. It is also why there have been a whole host of green papers, white papers and commission reports over the last two decades, but no meaningful policy change. Therefore, we have decided to reframe the challenge, to change tack and launch a major engagement exercise, starting by explaining the fundamental flaws with the current social care system.”

While I know this is what needs to be done, and is what I hope the paper will say, my imagination might be somewhat distorted by all the mince pies I’ve been eating recently. But let’s wait and see…

Bernadette Enright from Manchester City Council discusses the impact of the social care improvement plan IMPOWER have been supporting in Manchester.