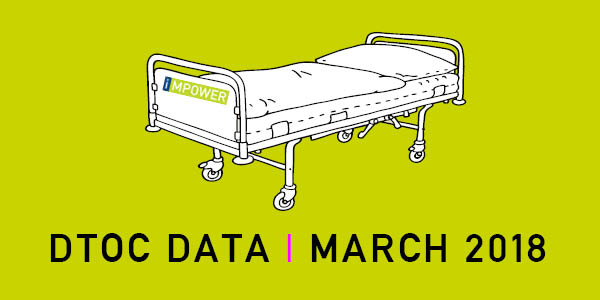 Figures released by NHS England yesterday show that DTOC performance remained flat for the third month in a row.  There was a very slight overall improvement (0.2%) between March and February,  with delays attributable to the NHS deteriorating by 2.3% and delays attributable to social care improving by 4.3%.  These balanced each other out to result in a negligible eight hospital beds freed up.

The overall picture isn’t bad – 119 local areas have improved their performance since targets were set in February 2017 – but the three months of plateauing raises a question. Looking ahead, is the significant resource and effort being ploughed into DTOC at both national and local levels still worthwhile?  It might be that we are holding the floodgates of a crisis back and doing a good job sustaining current performance – or we might just be into diminishing returns.

Either way, only 69 of the 150 areas are hitting their target, meaning that the NHS and local councils still need to free up another 900 beds across England. There aren’t any signs that the pressure to hit the target is going to go away.  So what should happen next: continue along the same path or dig deeper?

Action is certainly required. Emergency admissions continue to rise (2% higher in March 2018 compared to March 2017), next winter is already looming on the horizon, and if the sun continues to shine that could also create a new type of demand pressure in the system.

IMPOWER’s advice to health leaders is to take a step back and ask some simple questions. Do you fully understand the cohorts of people for whom you are currently providing discharge support?  Why were they admitted to hospital? What support were they receiving prior to that? Might there have been an alternative path?

Our most recent case note reviews produced some valuable insight:

Let me illustrate this with a hypothetical example drawn from typical cases we have seen on the ground.

Dorothy is an active and generally healthy 94-year-old living alone in warden-controlled housing.  She receives daily homecare support and frequent visits from her daughter.  One day, after Dorothy has felt unwell for 24 hours, the warden calls 999.  Dorothy is admitted to hospital for tests, but is given the all clear and is declared medically fit for discharge on day two.  However, she then gets an infection, and isn’t medically fit for a further 18 days.  Over that period her condition deteriorates to the point where she needs to be discharged into a nursing home.

At this point in the example, we can focus on making sure Dorothy isn’t delayed leaving hospital for the care home or we can rewind the sequence of events and make some changes.

An immediate extension of the homecare package would have supported Dorothy whilst she recuperated from her minor illness. Support from primary care might also have been required to confirm that there wasn’t a health diagnosis that required treatment. Yes, there is a possibility that Dorothy still may have needed residential care within a short period of time, but the hospital stay would have been avoided.

Our health and care system is currently characterised by poor outcomes and high costs. The average cost of an overnight stay in hospital is £400; a nursing home place costs £700 per week; but homecare support averages at just £150 per week.

What would happen if we reframed the problem and looked at early intervention rather than meeting demand? If the aforementioned 47% of people had got access to services earlier and were not therefore admitted to hospital in the first place, the DTOC problem would diminish considerably because there would be fewer people in hospital.  The pressure on and the cost to acute services would fall as fewer people were admitted. As for social care and community services, the costs might fall if we have fewer people needing tier 3 long term bed-based services at the point of discharge, but we might actually need to invest in extending reablement, nursing, therapy and homecare services to enable more people are able to live independently in their own homes.

We don’t need a new vanguard, policy change or any national initiatives to get on with this.  We need a relentless focus on supporting people to live independently in their own homes, a spotlight on admission avoidance and some more of the collaboration and joint working that we have seen work effectively in many areas to address DTOC.

...then select your local authority area or health Trust from the list

At IMPOWER we are always thinking with our clients about how to act innovatively to improve outcomes. The pandemic has…

ICSs, Desmond Tutu and the need for ‘going upstream’

ICSs, Desmond Tutu and the need for ‘going upstream’