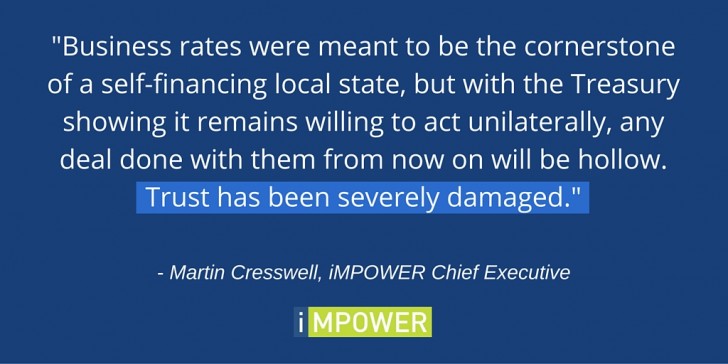 The Chancellor’s business rate reduction in today’s Budget is a bitter pill for local government to swallow. Just when it looked like devolution had been priced in fully by councils, the Chancellor used the Budget to jeopardise medium and long term financial plans. Business rates were meant to be the cornerstone of a self-financing local state, but with the Treasury showing it remains willing to act unilaterally, any deal done with them from now on will be hollow. Trust has been severely damaged.

The steps towards extending the school hours are well intentioned. The reality is, however, that many schools already run extended hours. The Chancellor’s hope that it results in a productivity boost may turn out to be correct but we won’t know for some time. Now that growth figures have been revised downwards the pressure will be on the Chancellor to squeeze every public pound further. His attempts at pension reform on high earners was blocked by his own side, and further welfare reductions are likely to run into a Labour-shaped road block.